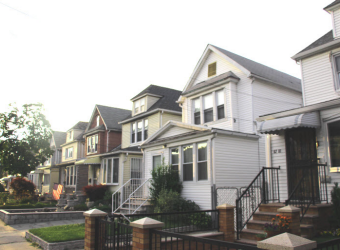 Rego Park is found in Queens, New York. Its history starts as a farmland named Whitepot, originally cultivated by English and Dutch, later including German and Chinese. The land was particularly suited for hay, straw, rye, and other vegetables. The Real Good Construction Company entered the area and started development in the 1920s. Rego Park’s name is derived from combining the first two letters of the first two words of the construction company’s name.

The area is confined by Queens, Woodhaven and Yellowstone Boulevards, forming a relatively triangular shape. Many streets have a distinctive crescent shape, lined with apartment and houses.

The crescent shape was a result of two railroad lines, one at each end of the streets. A Tudor style shaped some of the houses within Rego Park with distinctive slated roofs. There is much ethnic diversity throughout the area. Strong influence from the Jewish located there has to lead to many synagogues and kosher restaurants. The influences on Rego Park businesses range from East European, Middle Eastern, Central Asian, Asian, and Southeast Asian. The focus of the business is 63rd Drive, connecting Woodhaven and Queens Boulevard.

A notable site is the Our Savior Lutheran Church, established in 1926, with services conducted in English and Chinese. Other noteworthy establishments are Shalimar Diner, The Lefrak Organization, The Jay Dee Bakery and the Rego Center. Rego Park has been the setting for the sitcoms Dear John and King of Queens. It’s also home to the famous Archie Bunker, along with many other distinguished people. Rego Park is a culturally rich point, with an established history and quaint scenery.

Rego Park Realty is the go-to real estate agency that caters to selling homes in the Rego Park neighborhood. Contact us if you are looking to do business in Rego Park.