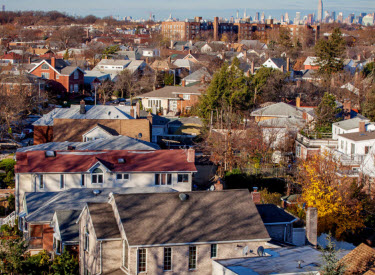 Rego Park is a neighborhood in the borough of Queens in New York City. Rego Park is bordered to the north by Elmhurst and Corona, to the east and south by Forest Hills, and to the west by Middle Village. Rego Park’s boundaries include Queens Boulevard, the Long Island Expressway, Woodhaven Boulevard, and Yellowstone Boulevard. There is a large Jewish population in the neighborhood, which features high-rise apartment buildings and detached houses, as well as a large commercial zone.

Rego Park is located in Queens Community District 6 and its ZIP Code is 11374. Like so many other neighborhoods in New York City, Rego Park is an ethnic enclave. Like its nearby neighbor Forest Hills, Rego Park has long had a significant Jewish population, most of which have Georgian and Russian Jewish ancestors, with a number of synagogues and kosher restaurants. Many Holocaust survivors settled in Rego Park after 1945. In the 1990s, Jewish immigrants from the former Soviet Union, especially from Central Asia, moved in and today most of the residents are of Bukharan Jewish descent, and the influence of their former cultural life in the Soviet Union on the population has led Rego Park to have a distinct Russian feel with many signs in Russian Cyrillic. Most of the Bukharan Jewish immigrants in the neighborhood come from Uzbekistan and Tajikistan, and there is also Uzbek and Tajik cuisines featured in many Rego Park restaurants.

Immigrant populations from Albania, Bosnia, Israel, Romania, Iran, Colombia, South Asia, China, Bulgaria, Peru, and South Korea are also represented in the neighborhood, as well as many restaurants and stores operated by people of diverse nationalities. In the 2000s and 2010s, many young professionals also moved in, and the average price of residential units in Rego Park increased correspondingly.

Many apartment buildings, multi-family, and railroad houses make up the north side of Rego Park. Apartment complexes include The Carol House, Savoy Gardens, Jupiter Court, The Brussels, and LeFrak City.

However, there are many houses in southern Rego Park that are in the colonial, English, and Tudor styles with slate roofs. There are also two and multi-family townhouses, detached wood-frame houses. This is especially so in an area called the Crescents, named for its semicircular shaped streets emanating in a concentric pattern from Alderton Street, between Woodhaven Boulevard and the Long Island Rail Road’s Main Line. The Crescents contain many Tudor and single-family homes, as well as large lawns and tree plantings on the sidewalks.

Rego Park is home to some of Queens’ most popular shopping destinations, including the 277,000-square-foot (25,700 m2), 4-floor Rego Center. The main business thoroughfare of Rego Park is 63rd Drive. The main section extends from Woodhaven Boulevard in the south, to Queens Boulevard in the north, with the central business district of Rego Park nestled between Alderton Street (just south of the Long Island Rail Road overpass), and Queens Boulevard. The stretch south of Alderton is entirely residential. The business district is anchored by The Rego Park School PS 139Q, an elementary school dating from 1928 and Our Saviour Lutheran Church established in 1926 which is right across Wetherole Street from PS 139Q. The business district is crisscrossed by four side streets: Saunders, Booth, Wetherole, and Austin Streets.

Across Queens Boulevard to the north, 63rd Drive becomes 63rd Road, and its business district continues another three blocks; 63rd Drive actually shifts one block south of 63rd Road. There are many small businesses in this area. Shopping districts with many smaller stores, bakeries, pharmacies and restaurants can be found along 108th Street as well.